In a recent research project coordinated by Jean Clobert and Fabien Aubret at SETE CNRS research station, Andréaz Dupoué sampled tens of common lizard populations (Zootoca vivipara) from the rear edge of the distribution in lowland areas and nearby sea level to the lead edge of the distribution in highland Pyrénées mountain. Sponsored by Ectopyr and Sentinelles du climat grant, this sampling program allowed for the first time a detailed analysis of the genetic footprints of range expansion, habitat fragmentation and climate change in this cold-specialist lizard species found in our mountain range in France. Neutral genetic markers were collected from each sample and their variation was compared between four different ecological units: the rear edge in the Landes forest, an admixture zone and the continuous range in the Pyrénées foothills and the lead edge in highland areas.

Results were strikingly similar to those predicted by a model of genetic structure designed to capture the population history and dynamics from the rear to the lead edge (Hampe and Petit, Ecology Letters 2005). Within the rear edge, we observed the highest levels of inbreeding, genetic differentiation and evidence of interrupted gene flow compared to central or lead edge areas of the distribution. This demonstrates that these relic populations, despite containing a significant genetic diversity globally, are highly fragmented and disconnected, probably as a consequence of climate warming and land use – remember we are in the Landes, a man made highly artificial ecosystem.

Within the leading edge, altitudinal range expansion high up on the mountains occurred over the last centuries and populations showed relatively low genetic diversity, probably as a consequence of founder effects. The recent range expansion is quite surprising and suggests that these species can disperse over significant distances when local habitat conditions improved.

In general, the demographic and genetic trends were better explained by climate conditions and forest cover. Relative abundance of lizards was smaller in the warm and dry lead edge populations. Inbreeding increased in landscapes less dominated by forests and in warmer climates. Genetic differentiation was higher in colder and more open landscapes. Genetic isolation by distance was relatively obvious but stronger in the leading edge.

These findings suggest unique genetic footprints of range expansion and environmental conditions that should promote the conservation of populations from the rear to the lead edge of the populations if ones would like to save genetic diversity and potential evolvability of this species.

Dupoué, A, Trochet, A, Richard, M, et al. Genetic and demographic trends from rear to leading edge are explained by climate and forest cover in a cold‐adapted ectotherm. Divers Distrib. 2020; 00: 1– 15.

Animals, and especially ectotherms, rely on behavioral thermoregulation to control their body temperature and perform optimally in their natural environment. It is therefore not surprising that research on these animals has focused on understanding the mechanisms and efficiency of thermoregulation behavior, especially in the context of global warming. Whereas most field studies are interested in behavioral responses of ectotherms to changes in their thermal environment, including mean thermal quality and occurrence of heat stress events, laboratory and experimental studies have shown that thermoregulation behavior is sensitive to a myriad of other abiotic factors, such as food and water, and biotic interactions, such as competition. So one key question is how much each factor contributes to explain natural variation in thermoregulation behavior and its efficiency given that natural populations are exposed to multi-factorial changes in the quality and the structure of the thermal landscape, in the water availability, etc. This question is difficult to tackle by paired comparisons of a small number of sites or by classical gradient studies.

To answer these questions, David Rozen-Rechels, a PhD student in our laboratory now post-doctoral researcher in the Max Planck Institute for Animal Behavior research group in Germany, performed one of the most exhaustive comparative study of thermoregulation behavior in the common lizard (Zootoca vivipara), a widespread species occurring in bogs, heather lands, meadows and forest clearances in cold and humid environments in France. Together with the group of Jean Clobert, especially post-doctoral and PhD students Andréaz Dupoué, Alexis Rutschmann, Pauline Blaimont and Arnaud Badiane, and with the help of Prof. Donald Miles, we sampled as many as 21 populations in Massif Central, France between 2016 and 2018. These populations are part of a long-term field study of geographic variation in reproductive strategies of female lizards. This sampling scheme allows us to test for effects of geographic variation caused by altitude, climate conditions or habitat because populations are scattered across a complex “gradient” of altitude, slope orientation and forest cover. The decision to sample populations during three successive years was a strength of this study. It allows us to make inference about effects of consistent differences among populations versus peculiar conditions observed only during one year due to weather fluctuations.

In each population, we measured the body temperature of lizards in the field and their location. We also sampled the thermal quality of the environment with physical models coupled with thermal data loggers. Some lizards were transported back to the laboratory to measure their thermal preferences in a gradient, a measure of their “ideal” body temperature without constraints and stress. Not to say this was a herculean work and around 2,000 lizards were gently processed during this research program. Together with Michaël Guillon, an independent researcher working part time for Biotope – an ecology expert office, we extracted detailed weather data to characterize historical conditions and annual conditions in each population.

But this was not enough … During the first field season in 2016, we decided to quantify micro-habitat structure and heterogeneity in each population. Indeed, one recent finding of thermoregulation research is that animals should thermoregulate better in more heterogeneous thermal environments, when a combination of shady and open micro-habitats allows them to heat or cool depending on their requirements. The habitats of the common lizard are extremely heterogeneous and we tried first to sample this diversity with detailed photographs taken close to the ground. But this took too much time and was difficult to process.

So we moved on and trained ourselves to use a commercial Drone equipped with a visible light camera and waited for authorization from the Parc national des Cévennes to ortho-photograph each site in 2017. We learnt from scratch this new technology and ended up photographing each population with a 1 square meter accuracy, sometimes in very difficult weather conditions. Two years later, our high-resolution images were converted into vegetation raster maps by David and one of his intern Victor Chauveau, who is a co-author on this study. David then transformed each vegetation map into a temperature heat-map using data from thermal sensors for the summer activity season obtained for each kind of vegetation and located in vegetation types ranging from dense shady forest patches to open rocky areas. That was it … we were done with the sampling of lizards and the characterization of their habitats, hoping for nice results !

To our great surprise, the field data indicated that micro-habitat quality and diversity was not the main factor explaining geographic variation in thermoregulation behavior nor altitude, mean thermal conditions or forest cover. Instead, thermal preferences of lizards were relatively constant across populations, as seen in other lizard species. In fact, we saw more variation in thermal preferences between kinds of lizards (e.g. males and females) than among populations, which was quite disappointing.

Yet, field body temperatures of lizards were influenced by both the mean thermal quality of the habitat (indexed by Tmax, the mean of the daily maximum temperatures) and historical rainfall conditions (indexed by a pluviometric quotient Q, where high values indicate a high ratio of rainfall relative to temperature). Lizards had higher body temperatures in populations exposed to hotter and wetter historical climate conditions and they also had less accurate thermoregulation (i.e., body temperatures closer to their thermal preferences) in cooler and wetter environments (see a figure with predictions from our best statistical model below, more detailed figures in the paper). This interactive effect between the thermal environment and rainfall conditions, hence water availability and hygric conditions, is a good example of our concept of lizards following an (optimal) thermo-hydroregulation behavior. According to this concept, the lizard behavior is optimized to respond to dual changes in the thermal environment and the water availability in the habitat (see our concept paper here).

These results as well as additional analyses are now published ahead of print in Ecological Monographs, one of the most prestigious society journal in ecology. Well done David ! We hope that our approach will stimulate future research on behavioral thermoregulation in ectotherms where the focus shifts from classical thermal biology questions to broader integration of other abiotic and biotic factors. For example, drone imaging with infrared cameras could be used in future studies to directly asses the thermal quality and heterogeneity of the environments. Animals could also be equipped with miniature sensors to improve the description of their thermoregulation behavior and understand better their heat and water budget. Such studies in natural populations are badly needed to evaluate if lizards can buffer the effects of climate change and habitat degradation with their (normal) thermo-hydroregulation behavior.

One of the greatest current threats to biodiversity is climate change. However, understanding of organismal responses to fluctuations in temperature and water availability is currently lacking, especially during fundamental life-history stages such as reproduction. To further explore how temperature and water availability impact maternal physiology and reproductive output, we recently investigated the viviparous form of the European common lizard (Zootoca vivipara) in a two-by-two factorial design manipulating both hydric and thermal conditions. We collected blood samples and morphological measurements during early pregnancy and post-parturition to investigate how water availability, temperature and a combination of the two influence maternal phenology, morphology, physiology and reproductive output. Our experiment shows that dehydration during gestation negatively affects maternal physiological condition (lower mass gain, higher tail reserve mobilization) but has little effect on reproductive output. These effects are mainly additive to temperature regimes, with a proportional increase in maternal costs in warmer environments. This new study demonstrates the importance of considering combined effects of water and temperature when investigating organismal responses to climate changes, especially during periods crucial for species survival such as reproduction.

Our new study published at Journal of Animal Ecology shows that old meadow vipers can maintain a high reproductive output and a high survival in the wild (negligible senescence). But the pattern of actuarial senescence is plastic and can shift from negligible senescence to strong senescence at a micro‐geographic scale.

Our new study published at Journal of Animal Ecology is a significant step forward in a scientific environment in which exploring the interaction of thermoregulation and hydroregulation processes is at the cutting edge of the study of the animal ecology of global changes. Its novelty relies in its potential to question the predictions of mechanistic niche models that neglect future changes in water availability. 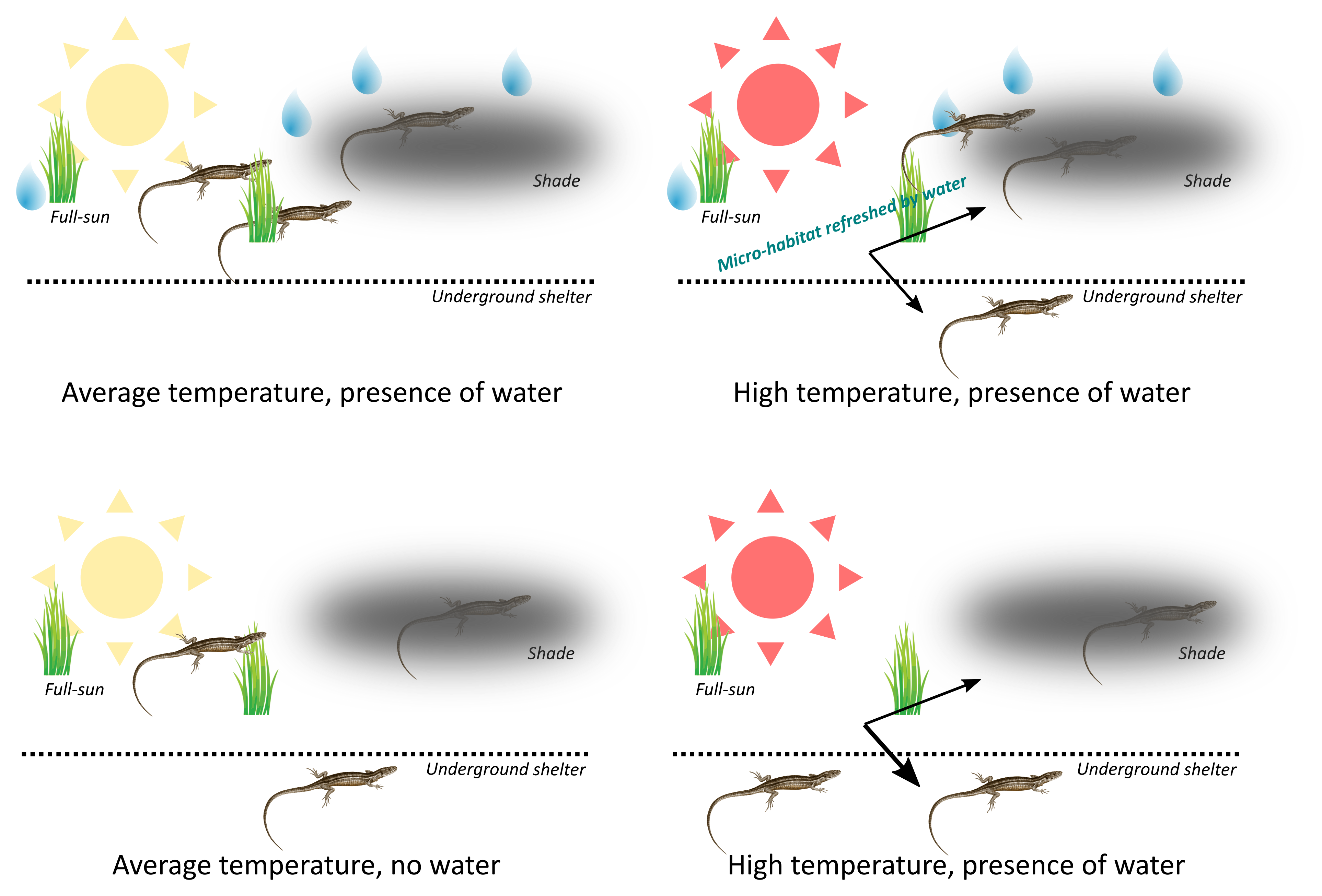